Types of Forests and Soils

Based on climatic conditions, forests are divided into categories. They are:

Tropical evergreen forests are found in the regions that receive annual precipitation of over 200 cm and mean annual temperature above 220C.

Tropical evergreen forests are found in the western slope of the Western Ghats, hills of the northeastern region, and the Andaman and Nicobar Islands.

In tropical evergreen forests, trees reach great heights, i.e., up to 60 m or even above. And, largely these trees do not have fixed time to shed their leaves.

Tropical Deciduous Forests are the most widespread forests of India and are popularly as Monsoon Forests. Tropical deciduous forests are found in the regions, which receive rainfall between 70 and 200 cm.

Dry deciduous forests are found in the regions that receive precipitation between 70 and 100 cm.

Tropical thorn forests are found in the areas, which receive rainfall less than 50 cm.

Deciduous forests are found in the foothills of the Himalayas. Temperate forests found between an altitude of 1,000 and 2,000 m.

In the higher hill ranges of northeastern India; for example, hilly areas of West Bengal and Uttaranchal, evergreen broad leaf trees such as oak and chestnut are predominant.

Between 3,000 and 4,000 m, Silver firs, junipers, pines, birch, and rhododendrons, etc. are found. However, at higher altitude, the tundra vegetation is found and major species are mosses and lichens. At a higher altitude, the southern mountain forests largely belong to the temperate type, which are locally known as ‘Sholas’ in the Nilgiris, Anaimalai,and Palani hills. Some of the trees of economic significance include magnolia, laurel, cinchona, and wattle.

India is rich in Littoral and Swamp Forests.

Chilika Lake (in Odisha) and Keoladeo National Park (in Bharatpur, Rajasthan) are protected as water- fowl habitats under the Convention of Wetlands of International Importance (i.e. Ramsar Convention). Mangrove grows along the coasts in the salt marshes, tidal creeks, mud flats, and estuaries; and, it has a number of salt-tolerant species of plants.

In India, the mangrove forests spread over 6,740 sq. km, which is 7% of the world’s mangrove forests. Mangroves are largely found in the Andaman and Nicobar Islands and the Sunderbans of West Bengal.

Soil Horizon is classified into three categories — Horizon A, Horizon B, and Horizon C; collectively known as Soil Profile (i.e. the arrangement of soil layers). 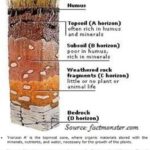 On the basis of genesis, color, composition, and location, the soils of India have been classified as:

Alluvial soils are widespread in the northern plains and the river valleys and cover about 40% of total area of India.

In the Upper and Middle Ganga plain, two different types of alluvial soils are found i.e. Khadar (it is the new alluvium and is deposited by floods annually) and Bhangar (it is a system of older alluvium, deposited away from the flood plains).

Also popular as Regur Soil or the Black Cotton Soil, Black soil covers most of the Deccan Plateau; for example, black soil is found in parts of Maharashtra, Madhya Pradesh, Gujarat, Andhra Pradesh, and Tamil Nadu.

Black soil is usually clayey, deep, and impermeable; therefore, it can retain the moisture for a very long time (very useful for the crops especially cotton). Black soil is rich in lime, iron, magnesia, alumina, and also potash. The color of the black soil varies from deep black to grey.

Red soil develops on crystalline igneous rocks in the areas of low rainfall,especially, in the eastern and southern parts of the Deccan Plateau.

Red soil develops a reddish color because of a wide diffusion of iron in crystalline and metamorphic rocks. On the other hand, it develops yellow color when it occurs in a hydrated form.

The laterite soils develop in areas of high temperature and high rainfall.

The laterite soils are commonly found in Karnataka, Kerala, Tamil Nadu, Madhya Pradesh, and the hilly areas of Odisha and Assam.

Laterite soils are the result of intense leaching due to tropical rains; because of rain, lime and silica are leached away, and soils become rich in iron oxide and aluminum.

Laterite soils however are poor in organic matter, nitrogen, phosphate, and calcium, but rich in iron oxide and potash.

Lower horizons of the arid soils are occupied by ‘kankar’ layers because of the increasing calcium content downwards.

Saline soils contain a larger proportion of sodium, potassium, and magnesium, and thus, they are infertile, and do not support vegetation. Because of the dry climate and poor drainage system, saline soil contains more salt.

Saline soils are normally found in arid and semi-arid regions, as well as in waterlogged and swampy areas. Deficient in nitrogen and calcium, saline soils are found in western Gujarat, deltas of the eastern coast, and in Sunderban areas of West Bengal.

In the areas of heavy rainfall and high humidity, large quantity of dead organic matter accumulates and enrich humus and organic content that forms the peaty soils.

Peaty soils are normally heavy and black in color and widely found in the northern part of Bihar, southern part of Uttaranchal, and the coastal areas of West Bengal, Odisha, and Tamil Nadu.

Decline in soil fertility because of any reason (either natural or human induced) is known as soil degradation.

Land use record is maintained by the Land Revenue Department. The Survey of India is accountable for measuring geographical area of administrative units in India.

There is difference between the actual forest area and the forest area defined by the Government.

Barren hilly terrains, desert lands, ravines, etc. normally are not suitable for cultivation, hence, they are known as Barren and Wastelands.

The land owned by the village panchayat comes under ‘Common Property Resources’.